If you’re a running back receiving the handoff, you have an opportunity to set your team up for success. In order to do so, there are three things you should be aware of:

The pocket is the space that you will provide for the quarterback to place the ball. This pocket should be wide. Your elbow closest to the quarterback is up and flexed at a 90-degree angle, so that your forearm is parallel with both the ground (vertically) and your upper chest (horizontally). On that hand, your palm should face the ground.

The arm that is farthest from the quarterback will be placed near your belly or waist. Your elbow will again be flexed at a 90-degree angle, so that your forearm runs across your body parallel to the ground. The palm on this hand should be facing up. The space between your arms is called the pocket and leaves plenty of room in the middle of your chest for the quarterback to place the ball. As the quarterback places the ball in the pocket, you should clamp down on the ball to secure it.

You also need to have proper posture. Once the ball is snapped to the quarterback, step forward with your eyes toward the line of scrimmage or the direction you are moving based on the play. Your knees should be bent and your arms in proper pocket position. Both the quarterback and the running back need to be on the same horizontal plane with the football and the pocket. You should have your head up, open chest, nice flexion in the hips, be on the balls of your feet and ready to make a play.

One flaw to avoid is in the positioning of your arms when creating your pocket. As you get close to the quarterback, make sure the elbow closest to the quarterback is not down. When this happens, as the quarterback puts the ball inside the pocket, your elbow can be in the way, hitting the ball and sending it on the ground.

A second potential flaw during the exchange from the quarterback to the running back is when you actually reach for the football during the handoff. You need to create a large pocket with proper arm positioning and proper posture. You should only close your arms on the ball once the ball is placed into the pocket. Reaching out for the ball to take it from the quarterback often results in a fumble.

As a running back, make sure you know the three keys to a successful exchange. Proper mesh point, pocket and posture. Through repetition you can create a clean handoff that can help eliminate turnovers and lead to an efficient running play. Now, learn how to run the ball post-handoff. 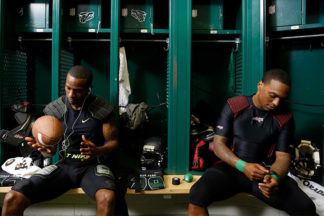 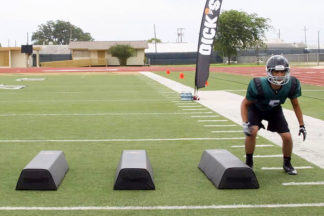 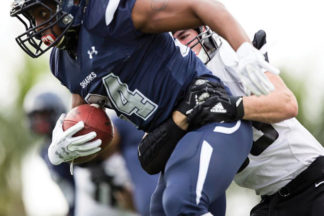 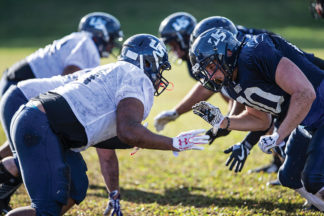 Defensive Line Tips: Exploding Off the Line of Scrimmage 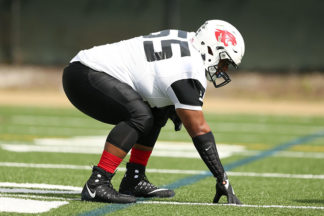 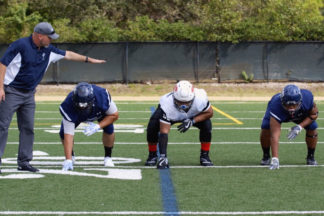